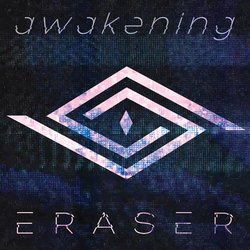 ERASER is a indie-electronic band from Dubbo NSW; the tangible expression of two people’s experiences, emotions, dreams and beliefs distilled into sound and lyric. At times moody, at times pop, and at times grunge; ERASER’s sound is inspired by the music of artists such as NIN and CROSSES combined with melodic and spacious vocals. In 2018, ERASER performed in support of One Proud Monkey’s Under Western Skies Tour, joining them for several dates, and also composed score for a locally-filmed documentary Pride Out West, released on ABC television and selected for several film festivals.

ERASER also released their debut EP, entitled Epilogue. Recorded at Mioan Studios in Dubbo and mastered by Pete Maher (U2, the Who) in London, the EP was released to a sold-out crowd at Dubbo’s Black Box Theatre in August. In 2019, ERASER began the year with a sold-out House Concert supported by Jo Hyndes, appeared at Under Western Skies Festival in support of Smith & Jones and Hatakaze, and played regionally in Inverell and Orange. They have been engaged to score upcoming screen projects 'To the end of the Earth' and 'Seeing', and are currently recording a new single to be released on August 10.


Awakening is the latest release from Dubbo electronic band ERASER. It deals with the subject of growing out of naivety, and discovering the true nature of people and the world. This is the most aggressive track written by the band, both in style and content, adding a rock feel to their typically downbeat electronica.