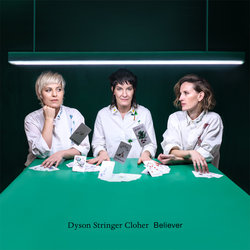 Dyson Stringer Cloher, the iconic project of three of Australia’s most accomplished and dynamic songwriters, Jen Cloher, Mia Dyson and Liz Stringer, formed on a whim and released an EP in 2013 which they then took on the road, playing over 40 shows around the country. Each then pursued their individual careers to great acclaim and respect. Between them they made a further six solo albums, won multiple awards and toured EVERYWHERE.

Their trio became what they now call “a fond memory and a series of tantalising unanswered questions.” Specifically – what would a full album sound like? If we – well – made one?

Dyson Stringer Cloher are thrilled to announce their self-titled debut album. Recorded and mixed in eight days at The Loft, Chicago in April, 2019. It’s affirming to hear. Music made in the moment. Many of the takes and vocals are live. Each of these three remarkable artists are a story on their own. Each has embarked on many journeys, faced challenges and stared down all the hopes & dreams. But together they bring something forward that only exists in the best collaborations. Something greater than the sum of their parts. A kind of magic.


The beautiful music video for 'Believer', directed by Annelise Hickey, follows Cloher's neighbour Lulu who plays for the Northcote Junior Football Team and aspires to play in the AFLW. The immediate power and focus of ‘Believer' felt like the perfect union of sound and vision based around aspiration, teamwork, community and reaching goals through self-discipline and self-love.