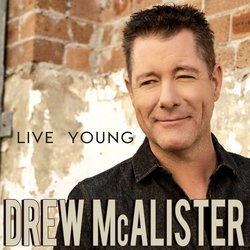 Drew McAlister needs little introduction to those who love the Australian Country Music scene. A firm feature of the last generation of singer-songwriters, Drew’s career has been prolific. A loving father of two and a much-adored, heartfelt friend to his fans, he is something of an icon of his time.

His catalogue includes five number one hit singles on the Country Music Chart as well as an ARIA Award nomination, four Golden Guitar Awards and an APRA Song Of The Year Award. He has worked with some of the worlds most internationally recognised names in country music, amassing a total of five albums under EMI, ABC and Universal Music ... and now joins the Checked Label Services Group.


‘Live Young’ possesses Drew's signature heartfelt message written from a place of personal experience and seeks to convey a message of positivity. “Live Young is a state of mind. My Dad was a great example of this before he passed and was always young at heart. You only have one trip around the sun so make sure you have fun!”