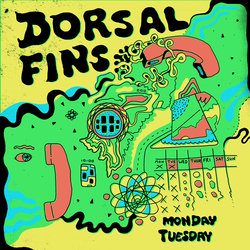 Dorsal Fins, the latest brainchild of Melbourne's busiest musician/composer Liam McGorry (Saskwatch, Eagle and the Worm). The band was originally envisaged as a 'recording-only' project with the intent of exploring an array sounds spanning from 80's dance music to 90's grunge, punk to synth pop ... it didn't take long before this changed and the band booked their first show and here's a review of this:

Last night we saw the debut performance of Dorsal Fins - the brain child of Liam McGorry (better known as the song-writer, trumpeter and quietly spoken boss-man of Saskwatch).

On stage were 10 musicians, including members of Saskwatch,Eagle & The Worm, New Gods, The Blue Bottles, Ella Thompson, Jim Lawrie, The Bowers and Fraser A. Gorman.

The band could have been forgiven for not living up to the sum of their parts - but honestly, It was glorious. Loud. Fun. Tight. Up there with the best shows we've seen this year already. It was like watching Broken Social Scene play songs by Gorillaz. Do yourself a favour and visit their Soundcloud and listen to their just released Gripless EP. World Class!


"Dorsal Fins got together to explore a range of music from various genres and eras, and that intent is clear on their new track ... Upbeat and poppy, the synth-driven arrangement drips with 80s swagger, especially when paired with Ella Thompson's alluring vocals ..."
Indieshuffle

Other tracks by Dorsal Fins: Fell