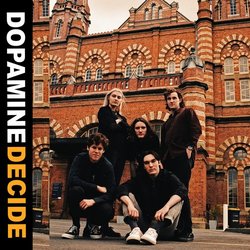 Dopamine started in 2017 when Finley Miller, Luke Gregory, Ollie Whitaker and Finn 'Diggsy' Diggles met at university. Realising that they all had similar tastes in music, they decided to form a band. In search for a bass player, Luke asked his school friend Ruby Lee to play bass. She agreed, finalising the groups lineup. Throughout the end of 2017 to the end of 2018, the band kept a rigorous schedule of playing every second night around various local bars and venues, while also releasing the Outlaw EP. Their momentum quickly started to build and at the end of 2018 they played to a sold-out crowd for the release of their debut single 'Ordinary People'. After proving to themselves that they could headline their own shows, the group played to a packed crowd at The Foundry for their first show of 2019. After this, Dopamine have been seen playing alongside the likes of Last Dinosaurs, The Delta Riggs, Jeremy Neale and many others.


Decide is about the initial feelings that you feel in a relationship. As in the uncertainty of where it will go and the hesitance to put all of your trust into someone with the fear that you could get hurt.