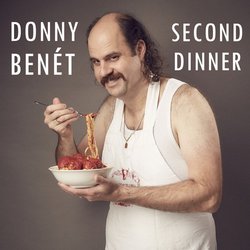 The past 24 months have been a whirlwind for Donny Benét. After releasing his fourth album The Don in March 2018, Bénet embarked on a debut solo European tour in July 2018. The shows grew an immense buzz.

Benét returned in September 2018 for a small festival run and then a third time in October where he sold out all 19 European headline dates, received coverage on Vice Netherlands, and spins on BBC 6.

2019 saw Bénet bring the global fever back to Australia with Weekend at Donny’s celebrations in Melbourne and Sydney. Other AUS festival highlights include Sydney Festival, Darwin Festival, Vivid Festival, Adelaide Festival, MONA FOMA, Panama Festival and Yours and Owls.

This month, Benét returned to North America in support of Drugdealer and performed debut headline dates in Los Angeles, New York and Chicago. While in town he recorded an in-studio session with KEXP.


Premiered by KEXP's Kevin Coles, ‘Second Dinner’ was written after a year of frenetic European touring at the infamous Donnyland Studios and produced/engineered by Burke Reid. The track is a hooky, groove-driven, and unashamed ode to the dopamine inducing late night meal. The music video, collaborated with venerated director Alex Smith ('Konichiwa') to create another visual masterpiece, premiered on YouTube.