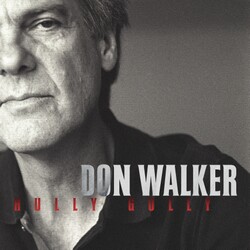 With the release his 3rd solo album Hully Gully through MGM on August 16th, Don and his band The Suave F***s will take this new instalment of dark stories, hope and humour on the road along the East Coast this November. They’ll be showcasing the new album and of course performing old favourites, in a warm and friendly way.

Walker has few peers in illuminating the darker underbelly of the Australian psyche, whether he’s performing with Cold Chisel, Tex, Don and Charlie or solo. Angry women, luck-chasers, wannabe’s, and anyone who just wants to throw the afternoon away on a game of pool – none are excluded and none are described with greater authenticity.

Mixed by Joe Henry in Pasadena, Hully Gully was written by Don and recorded over several years and studio sessions with his band The Suave Fucks featuring Glen Hannah, Roy Payne, Garrett Costigan, Michael Vidale and Hamish Stuart. The first single from Hully Gully is the dream song Young Girls that drifts and drives a pair of new lovers towards a paradise they know lies somewhere North

Other tracks by Don Walker: Young Girls  -  The Perfect Crime