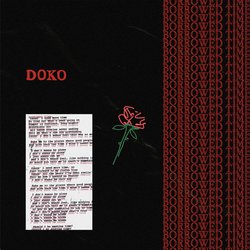 Doko dropped their EP Dezmonia in 2016, an uncompromising foray into psychedelic beach rock. With assistance from producer Chris Rolans (Lanie Lane, Cloud Control) they created something wild and unique while still holding on to their pop sensibilities. The EP’s “care-free licks and crooning vocals” were met with an enthusiastic reception from fans and local media, receiving an A+ rating from the Pilerats music blog.

The EP picked up support from FBi Radio, local press coupled with an east coast tour, and also picked up international support, with rotation from American and Canadian college radio stations.

Doko have spent the last year writing and recording with ARIA award-winning producer Steven Schram (San Cisco, I Know Leopard). During this time the band built upon their sound, taking influence from the New Wave acts of the 70s & 80s. These sessions produced singles such as ‘Break Open’, which received support from triple j Unearthed, and ‘Walking on the Ocean’, put the band on a tour of NSW. Doko are gearing up for a tour of the east coast in support of ‘Borrowed Time’. Expect to see the band on the road again with more new material before the end of 2019.


Borrowed Time is about the state of Sydney’s live music scene, after World Bar closed (the first venue the band ever played), and the NSW government had cracked down on live music & festivals statewide. The anxiety we had about the change that was happening in our home state had a large influence on the sentiment of ‘Borrowed Time’.