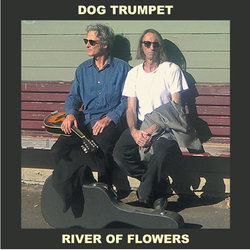 The brothers were of course original members of art school band Mental As Anything, both having contributed to Mentals albums songs such as 'Berserk Warriors', 'Egypt', 'Brain Brain', 'Apocalypso', 'Surf and Mull and Sex and Fun' and 'Psychedelic Peace Lamp'. By the end of the 1990s they left the Mentals to concentrate on Dog Trumpet and to continue their respective parallel careers as visual artists. Reg is well known for his iconic and humorous work for Mambo Graphics and as a painter and drawer. He has been represented by Watters gallery in East Sydney for several decades. Peter shows his paintings with the nearby King Street Gallery on William. Between them they have exhibited all over Australia, in New Zealand, England and Italy. River Of Flowers (hac141) is Dog Trumpet's new album, the result of three years writing and recording by the brothers Reg Mombassa and Peter O'Doherty at their Big Brain Studio. It is their fifth release, the follow up to 2007's Antisocial Tendencies and contains some of their most personal and autobiographical songwriting to date. Dog Trumpet's fourth album Antisocial Tendencies was released in March 2007.