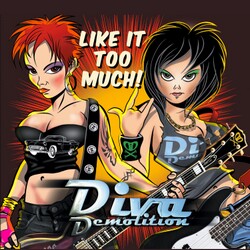 Singer, songwriter and bass player Kylie Cowling and guitarist Sherree Newton have been gigging around the nation together since 2005. In 2010, the pair rebranded themselves as Diva Demolition, recruited a couple of new members and quickly entrenched themselves in the local scene.

Signing to Spitfire Music, Diva Demolition hooked up with international producer, Craig Porteils (Diesel, Fleetwood Mac, Cher), and got stuck into recording their debut album. The first fruit from those sessions was last November’s single, Derby Girls, with their follow up, Energy, being picked up by the Triple M network and played by some 100 stations around the nation. Barely drawing breath, the Divas released their next single, Diva Disease on April 19. They now release their album 'Like It Too Much' on August 2 thru MGM on their Miss Adventures tour.


Two Rock Divas and a Toy Boy had fun recording this collection of kick arse tunes. It excited the powers that be so much they kicked off their live career opening for the worlds best loved rock bands around Australia. This album is ready for sacrifice to the rock gods.

Other tracks by Diva Demolition: Energy  -  It's A Bit Strange
%