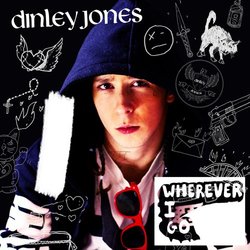 After the success of Dinley's debut single 'Radio' he went on to direct a music Video for 'Fire'. There is no end to the talent of this backflipping, dance monkey. In this new release see the sensitive side of Dinley, he Starts a conversation about suicide prevention and anxiety in young men.

Dinley Jones has been performing on stages since 2011, when his singing teacher got him to audition for the Captiol Theatre Production of Mary Poppins, and he was accepted.

Showing a maturity and work-ethic beyond his years, Dinley pushed himself to master a repertoire of talents including, juggling, card magic, ventriloquism, acrobatics and dancing. Dinley has seen himself perform under national spotlights including performances on X Factor as a boy group, the 2014 & 2015 NSW Eisteddfod Opera House finals and a list of performances and workshops throughout the U.S.A.


A chilled R&B groove, heartfelt vocal delivery, easy to listen to. The ambience of rain on the track.

This track discusses anxiety and depression in all men . ut Dinley is speaking on behalf of the young men. This is something that many, including Dinley have struggled to deal with in either the past or present.