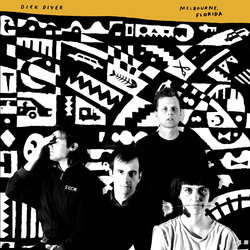 Melbourne, Florida graced many end of year best-of lists and has made the shortlist for the Australian Music Prize.
Over the last few years, the band has shone at Golden Plains, Meredith, Brisbane Festival and Laneway Festivals, play sold out headline shows around the nation and visited the US twice, where Melbourne, Florida was released by Chicago label Trouble In Mind.

They've had reviews such as “the unexpected Australian break-out record of the year” (Herald Sun), “everyday Australian life made bittersweet and poetic” (Rolling Stone) and “feels like an old friend, the kind that can comfort you through dark times” (Courier Mail).
Formed in 2008, Dick Diver have been special from the outset. Guitarists Rupert Edwards and Alistair McKay's bookish proclivities are pitted against drummer Steph Hughes and bassist Al Montfort’s casual, scrappy charm.

All their records to date have been recorded by Mikey Young (Total Control, Eddy Current Suppression Ring) in out of the way locations, including a farmhouse in the Dandenongs and a Philip Island holiday house.

Other tracks by Dick Diver: Tearing The Posters Down  -  Leftovers
%