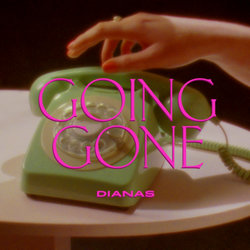 Formed from a heady combination of cheap red wine, stolen guitars, heartbreak and boredom, Dianas have been cultivating their unique DIY pop sound in dingy share house lounge rooms since 2012.

A couple EPs, an album, a brief hiatus and a few lineup changes later - the past few years have seen the band truly came into their own. Dianas’ live show has been described as a raw and driving whirlpool of pulsating drums and siren song vocal harmonies, with interweaving bass and guitar melodies creating a sound that is both spacey and intricate.

Recent band highlights include the release of EP “Leave Love” (Inertia Access, Healthy Tapes), support slots for acts such as Jens Lekman, the Allah-Lahs, Gold Class and Mere Women, a headline coast-to-coast national tour, festival slots at New Years Evie and By The Meadow; as well as a number of headline shows in their adopted hometown of Melbourne.

The band have been laying low finishing their sophomore LP ‘Baby Baby’, a culmination of their intricate history and interlacing musical connection.


Tough and tender like rhinestones on a beat-up acid-wash denim jacket, 'Going Gone' flickers between desire and desperation. Gritty guitars weave beneath Nathalie and Caity's vocals whilst Anetta's driving drums propel the song forward - a sound that has become iconically Dianas.