Destiny - Put On A Good Show 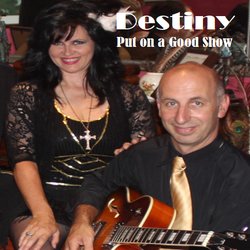 Destiny (Band Oz) is a 6 piece working band based in Gippsland, Australia and was created by Australian singer-songwriter-recording artists, Thomas and Tessa Libreri. It was so named as it seemed like 'destiny' that they had met!

They've recorded 2 albums and an EP with another album to be released in 2018. Their first radio single release was only in 2017 and they have since had great independent chart success with all of their original releases so far with many #1 hits, awards and nominations including being finalists in 2 categories of the Australian ICMA Awards (to be awarded at Tamworth 2019) and nominees in 3 categories of the acclaimed Josie Music Awards 2018 USA!


'Put On A Good Show', composed by Thomas Libreri and sung by Tessa Libreri is a fun, upbeat testament that their band, Destiny, always wants to put on a 'good show' everywhere they go. Recorded by Chris Gale of Rezonate.