Destiny (Band - Oz) - The Thing I Like Best About You 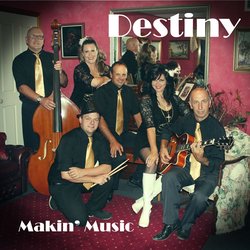 Destiny (Band-Oz) is an award-winning 6 piece Australian show band based in Gippsland, Victoria which was formed by singer/songwriters, Thomas & Tessa Libreri. Their original songs are a distinctive, blend of country, jazz and rock style music ranging from smooth, soulful ballads to fun, pumpy, country rock and retro classics.

Destiny has recorded 2 albums of original music with more on the way! They released their first song called 'One Love' to radio in March 2017 from their debut album, 'Take Me Back in Time' and their 2nd release in June, 2017 called 'The Thing I Like Best About You' from their album, 'Makin Music' and have had sustained success on various country charts around Australia.

You can catch one of Destiny's many live shows playing at various venues in the Gippsland area. - Check out their gig guide on their website or facebook page for details.

Other tracks by Destiny (Band - Oz): Makin Music  -  One Love