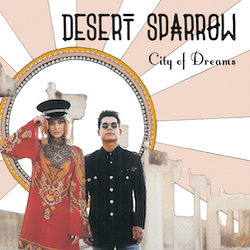 Kylie and Dave began their musical journey together by playing covers at local open mic nights early 2013 before forming their own creative path into songwriting.

Kylie begun playing the piano at age 5 while her childhood memories of Stevie Nicks playing on her parents' stereo sparked her love for singing. Singing in her bedroom was always a way of releasing emotions behind closed doors, but never did she have the intention to take it to the stage. However, after losing a bet to a friend, Kylie found herself singing karaoke in a restaurant and never looked back.

Dave decided to learn guitar after watching a live performance of BRMC. Later, a friend gave him a copy of Oasis ‘Definitely Maybe’ and then realized he wanted to pursue music professionally.

'City of Dreams' exhibits their versatility as songwriters to resonate with a universal audience, which Sean McCauley (MondoTunes) cites as “Sonorous, rural, and with roots wrapped deep in the rock 'n' roll tradition, City of Dreams is an EP sure to resonate with fans of many music genres.”


Cinematic, with juxtaposition of light and dark imagery. This song is a coming-of-age tale of shedding one's naive innocence through growing up and exposure to the deception of others. It's a learning lesson of blind faith: be aware of your surroundings and those who promise you everything. Potential movie soundtrack.

Other tracks by Desert Sparrow: City of Dreams  -  Say Goodbye
%