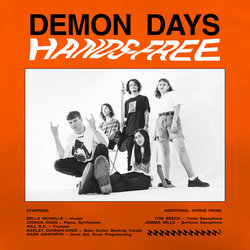 Perth’s Demon Days are the exciting five member Jazz Funk/Neo Soul collective set to captivate audiences and “transform any group of 20-somethings into an appreciative audience of jazz cats” (themusic.com.au).

The group garner influences from Hip Hop, Soul, Funk, Jazz, Fusion, and everything in between.

Their singles Lost In Translation, Killer Bees and No Winners all received praises and plenty of airplay from Triple J and have landed rotation on FBI, and airplay with stations like RTRFM, 3RRR, Radio Adelaide & 4ZZZ.


Lyricist Bella Nicholl's second enquiry into her identity as a feminist draws from disco, blues, funk and jazz.

"Society makes men feel uncomfortable/embarrassed to talk about their experiences - which is just contributing to the systematic problem of toxic masculinity. This song is for all the ‘Andy’s that have felt too diminished to come forward with their trauma." - Nicholls