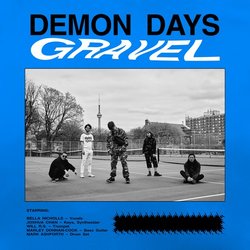 With an eclectic mix of styles and influences, Demon Days have flourished into something greater, with a high-energy live set, accompanied by dexterity and the chops to showcase it.

Their singles 'Lost In Translation', 'Killer Bees', 'Daria’s Smile', 'Disco Baby' and 'No Winners' all received praises and airplay from Triple J and have landed rotation on RTRFM, 3RRR, FBi, Radio Adelaide and 4ZZZ.

In 2019 the band returned with their self produced single 'Hands-Free', accompanied by an Australian tour boasting packed out rooms across the country as well as their first international appearance at Canadian Music Week in May.


Demon Days launch their new single “Gravel” ahead of their sophomore EP release “Taking It Slow This Time”.

The band’s self-produced “Gravel” starts with playful synth pads and quickly diverges into a much more mature and smooth sound with Bella Nicholls smooth vocals sauntering in to sit amongst a mellow backing of fluid synths, strolling bass and relaxed drums.