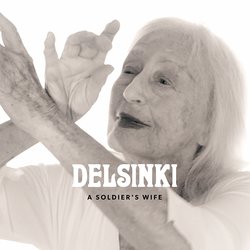 What do the ACO, Jim Moginie from Midnight Oil, Steve Pigram from the Pigram Brothers, Brian Ritchie from the Violent Femmes, Richard Tognetti, cinematographer Jon Frank and astounding indigenous musician “Yamatji Man” Mark Atkins have in common?
DELSINKI has joined creative forces with them all.

Shape-shifting uncategorisable post-colonialist (as well as newish father and stone-cold drop dead cool dude) DELSINKI will release his debut album, “And No Place Was Found for Them”, on Anzac Day ; an amalgam of honest and compelling narratives about war, loss, ageing, tribalism, emotions, nature, the futility of urban life and the perils of conformity. Big themes, fully realised.

Produced elegantly by Cameron McKenzie, the songs are by turn brittle and delicate, orchestral, then rollicking, then hard hitting, then reflective. The album covers the scope of DELSINKI’s extraordinary gamut of styles and collaborations, and each song is accompanied by a deluxe video. These videos will be released one at a time over the next 12 months.