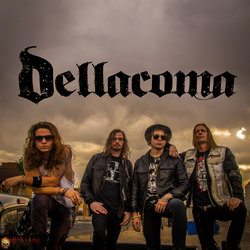 Combining a powerful sense of groove with melody driven songwriting and a live show that has left audiences across the world breath taken, DELLACOMA burst on to the global rock scene like a hunter stalking his prey.

Fronted by Melbourne native and front man Dellacoma Rio they were brought together through a mutual love of honest and raw rock n roll. a desire to breathe new life into what has been called 'a dying breed', their debut tour featured 80 shows across a grueling 95,000 km trek throughout the USA.

Not content to stay still for too long this swaggering quartet also managed to record their debut album, SOUTH OF EVERYTHING that features the single MY KINDA WOMAN.
The boys already have major touring plans in place for 2015 having been announced to play at the prestigious SXSW, Rocklahoma and Rock USA festivals.

DELLACOMA is a band with a reckless and wild visual and auditory assault live and SOUTH OF EVERYTHING is a very real snapshot of a passionate band who lived and breathed life together, in a van, on the road, rolling down highway after highway.

The debut album South Of Everything is released via Shock Records 10 April.


Melody driven Rock n Roll with a touch of Glam