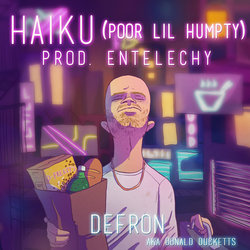 Picture Peter Pan sporting a shaved head in a pair of sneakers dropping bookworm bravado. You have Defron. Nostalgic of simpler days when life was just wearing-out your favourite cartoon on VHS, this 26 year-old Melbourne emcee combines confessional song-writing with abstract braggadocio to provide hip-hop that same release from the mundane.

Diagnosed with hearing loss at age five, the future rapper/poet was forced to grow up quickly. In surviving five mastoid operations by the age of ten, followed by a bout with testicular cancer at age 20, Defron escaped his routine of hospital visits by devouring comic books and music. He then turned to the page where he became his own superhero.

Flexing a penchant for syncopated vocal samples and multi-layered instrumentation, Defron’s anvil-dropping flow has been heard over melodic beat-scapes on Triple J and Triple R, and seen alongside the stage with OFWGKTA, Mantra, 360, Dylan Joel and Illy.

Evident on his debut EP, 'Invalid', Defron’s mature realism and conceptual style is told with youthful charm and inventive wordplay. Narrating hardboiled wisdom with a child-like charisma and fierce cadence, Defron tells our inner child to never grow up, but reminds our outer adult that we had no choice.


‘Haiku’ has been taken from Defron’s mixtape ‘Maybe You’ll Be Famous When You’re Dead’ that covers the
minutiae of his struggle with anxiety and depression.

Produced by Entelechy, it brings an anthemic-hip-hop piece that comes with a mid-track switch-up transitioning from a rising epic story-telling track into a synth-filled drop. Filled with icy-lyricism, ‘Haiku’ boasts a lengthy 5-minute duration.