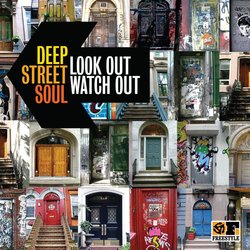 Formed in 2006 Deep Street Soul released their first 7inch through niche funk Jaycees in 2007. With local radio support and international play on the BBC6’s ‘Craig Charles funk & soul show’ the initial pressing sold out. In 2008 the band dropped their second sell out 7inch on Jaycees, receiving reviews and continued support from the UK on BBC. The outtakes from this session were then repackaged and released on Straightup Recordings as a digital EP which saw airplay & exposure throughout Spain, France & Germany.

In late 2008 after hearing these recordings Freestyle Records (UK) boss & London’s Jazz Café booker Adrian Gibson contacted the band and asked them to sign to his label. \u2028\u2028The debut album was recorded in early 2009 and was released on Freestyle Records in October 2009. The album made waves across the globe with stellar reviews coming from across Europe & the US. They backed this up with a 2010 European tour, which included an hour long, live to air performance on Mark Lamarr’s seminal Friday night show on BBC2 and gigs across the UK, France & Spain.


For fans of Deep Street Soul’s previous diamond-hard funk and soul outings, this single serves as a tasty teaser for the forthcoming second long player, due for release on November 11 2011.

Other tracks by Deep Street Soul: Hold On Me
%