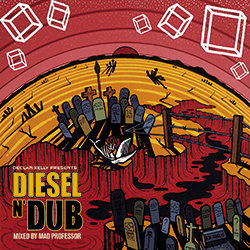 Highly respected Australian musician and producer Declan Kelly hatched the idea of reinventing some of Australia’s most powerful protest songs into dub-reggae anthems. In developing the concept Kelly was motivated by the strong parallels between reggae music’s social conscience foundations and the outspoken political activism in Midnight Oil’s songs. “Diesel n’Dub was a dream of mine for a long while. I had heard some of the Midnight Oil songs sung by other people and especially First Australians, then with my love of reggae music felt it right to fuse the two together. Reggae has always been a platform for rebel music, and Midnight Oil has always been a band that addresses world issues in a powerful musical way. I am always humbled by their willingness to take a stand and voice out what needs to be said. To invite prominent Indigenous singers to sing the parts once sung by Peter Garrett seemed very fitting.” (Declan Kelly)

Other tracks by Declan Kelly presents Dieseln'Dub: King of The Mountain  -  Power and the Passion