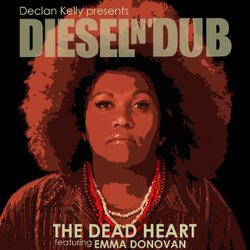 Iconic Australian hit The Dead Heart launches Sydney musician and producer Declan Kelly’s long-incubating passion project Diesel n’Dub, in aid of raising awareness and funds for Indigenous literacy across the country. Featuring Emma Donovan’s powerful and soaring vocals, the track got the reggae-dub treatment by legendary Mad Professor (Neil Fraser) at his Ariwa Studios, London. Diesel n’Dub is the latest addition to a growing body of work by Kelly, a highly respected and hard-working artist. Kelly plays regularly across Australia and abroad at the world’s biggest roots and world music festivals as a solo artist, with his trio The Rising Sun, or as a special guest. Sought after for his drumkit skills he has shared stages, toured and recorded with international artists the likes of Passenger (UK), Spearhead (US), Stranger Cole (Jamaica), and Eugene Hideaway Bridges (US), and has collaborated with artists Alex Lloyd, Katie Noonan, Karise Eden, OKA and KingTide. Most recently he had tracks from his stunning album “Adrift” feature in the BBC series “Top of the Lake” directed by Jane Campion. With this new single just the tip of the Diesel n’Dub iceberg, Kelly has further broadened his horizons and created a major new musical release.


The Dead Heart is Emma Donovan's powerful and heartfelt rendition of the Midnight Oil hit, presented by Declan Kelly's Diesel n'Dub and mixed by dub legend Mad Professor. In support of the Indigenous Literacy Foundation it features a chorus in Donovan's traditional Gumbayngirr language, resulting in a stunning dub-reggae anthem.