Amrap's AirIt | Australian Music Radio Airplay Project :: Metal :: Deathbeds - What's Yours Is Mine And What's Mine Is Mine - Internet Download 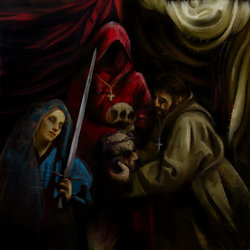 Formed in 2015 by guitarist Anthony Hyde, vocalist David Oliver and bassist Marc Beresford, Deathbeds dedicated three years to mastering their craft before they debuted their live show and their current lineup in 2018 consisting of Anthony, David and Marc alongside new members Kit Samin on keys and vocals, Sam Moloney on drums and Benjamin Poulsen on guitar. November 2018 rolled around shortly after and saw the release of the 'Death' EP which was recorded by Calum Johnstone of Honest Crooks.

Previous track "Biggest Sin Of All" is the sixth track on 'Sinner' and was released in March 2019 as the first taste of the forthcoming album and was received with open arms. Spotify immediately added the track to the Homegrown + Heavy editorial playlist alongside a plethora of Australian favourites, with the track almost at 50,000 streams. Following the success of this release, Deathbeds jumped on local support slots for the likes of Slaves (US), Awaken I Am, Boris The Blade and She Cries Wolf.


"What's Yours Is Mine And What's Mine Is Mine" narrates the theme of greed - mixed and mastered by Scottie Simpson and tracked at Colossal Tracks Studios. Beginning with an ear pricking melodic riff, leading way into the wall of sound that ensues. Deathbeds utilise Maddison Samin's soaring female vocals and keys to juxtapose against the driving chaos.