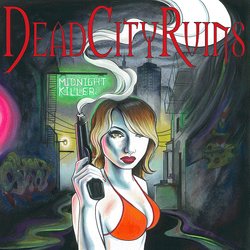 Dead City Ruins came together at the end of summer, 2007. Formed in London by three English mates (Charles, Olek, James and two Australians, Jake and Mick). The band started out as a fusion of blues and hard rock with a goal being to write songs about the struggle of life in one of the biggest and hardest cities in the world. In the first 12 months Dead City Ruins secured a monthly Saturday night residency at the Shepherds Bush Belushies and performed in some of the city’s best known rock n roll bars and clubs (At times playing up to 5 shows a week). Some of these venues included Bar Monsta , The Purple Turtle, The Good Ship and The Unicorn to name just a few. After 12 months of building a solid live set and dangerous stage show, the band . With offers coming in thick and fast to play shows in Sweden, Germany and a festival offer in Dubai. After almost 2 years of gigging and debauchery in London, Mick and Jake headed back to Melbourne, Australia


It's a must have on you playlist