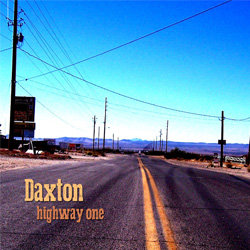 Following the release of his self-titled album in 2009 a track from the album ‘Moody Liz’ was featured on a popular American TV series Doll House.

This led Daxton to travel to America in 2010 to broaden his music career. He spent time in Nashville and played shows at the Douglas Corner Cafe, the West Nashville Holiday Inn and the Blue Bird Café. Making the most of the songs written in Nashville and LA, Daxton recorded the album ‘Thin Tall Lily’. From the tortured yet somehow happy vocals on opening track ‘Automatic’ to the easy going radio friendly ‘Good Time Friends’ and ‘Perfect Day’ the album contains a wealth of catchy up tempo tunes and authentic stomp box blues tracks. A heavy touring schedule and support from Blues oriented radio stations has seen Daxton develop a strong and loyal following.

The new release was inspired by Daxton’s love of the TV series Sons of Anarchy delivers the intense Blues/Rock style that Daxton has developed through his live shows.


Singing in a higher register is a new vibe from Daxton but he carries it off well on this song as part of his road trip themed EP. Backed up with a solid mid tempo backing and some tasty slide guitar.

Other tracks by Daxton: Highway One  -  Bad Ass
%