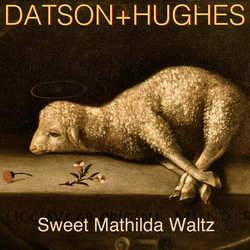 Geoffrey Datson and Annette Hughes began their artistic collaboration in 2000 when they set up their independent stickylabel. In 2008 Hughes picked up Datson's dulcimer and they began reverse engineering his electronica into acoustic arrangements.

In 2012, record producer Kalju Tonuma appeared and their project - to record a classic double album of Datson Hughes' best songs is now complete. Datson Hughes has released 2 singles - Poor Time, and Theif of Sky (Planet B side). Thief of sky was highly commended in the 2016 Q Music Awards. They have packed up their books and clothes and now, after all this time and much rehearsal, are pleased to present the work live. They are currently on a year long tour of their EP Whispering Highway in the lead up to the release of their debut Album in late 2017.
They will be waltzing Mathilda down the Pacific and Hume Highway legs of the tour, kicking off in Brisbane 18 March for further details go to the website.


Take an old time trope, mix it with a lick of swing, a mournful guitar and whole lot of love and longing, and you have an instant sad country song: Time for a new anthem for a new Australia.