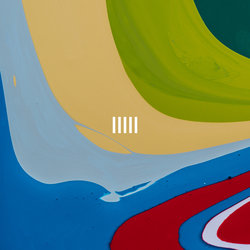 Dappled Cities return with their fifth full-length album Five (Stylised as |||||) on May 5. As the title suggests, Five is the Sydney indie pop group’s fifth record, and the sound of a band filled with a quiet self-assurance. “I’d call this record grown up. I take pride in that,” Rennick says. Tapping into the timeless qualities of ’70s mavericks like David Bowie and Roxy Music, they’ve created songs that sound mature but undeniably sexy.
Over their career Dappled Cities have played almost every major festival including Laneway, Falls, Big Day Out, Homebake, Splendour In The Grass and the Sydney Festival. They’ve attended SXSW four times as part of the official lineup and toured the US and the UK extensively. Most recently, Dappled Cities worked with members of the Australian Brandenburg Orchestra for the Sydney Festival, combining Baroque instrumentation with synthesisers and guitars for a one-off extravaganza at Sydney Town Hall, and a slew of side projects (Swimwear, The Curse Of Company, Light Pressure) and collaborations (Feelings, Disney's Alphabreaks, Jane Campion's Top Of The Lake).