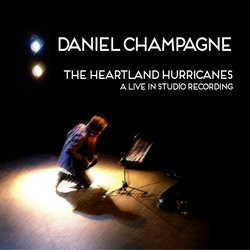 One of a kind guitar virtuoso Daniel Champagne has a new live-in-studio album ‘The Heartland Hurricanes’ and a world tour that will take him to Australia, New Zealand, The United Kingdom, Belgium, Ireland, The USA and Canada in the first half of 2016.

This story all began with a five year old Daniel picking up a guitar in the footsteps of a musical father, writing his first songs at twelve, training classically throughout his teens and playing wherever he could to develop the dynamite live show he is renowned for today. At eighteen he left school, hit the road and hasn’t really stopped since as the following years saw him tour endlessly around the world, playing some of the most renowned festivals and sharing stages with the likes of Lucinda Williams, Ani DiFranco, Rodrigo y Gabriella, The Waifs, Judy Collins, INXS and John Butler - all while writing, producing and independently releasing two EPs and three albums.

In 2014 Champagne made the move to America, basing himself out of Nashville and beginning to spread his music to all corners of the continent honing his craft and eventually confirming the material that would begin his newest chapter, ‘The Heartland Hurricanes’.


I wrote this on a flight from LA to Sydney. It’s about a friend who lives in West Hollywood and a thought that comes to me when ever I’m in that town. I think about how we get told to follow the stars but nobody ever says which ones.