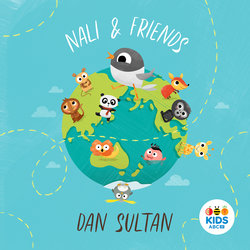 Dan Sultan is a critically acclaimed and widely adored Australian singer/songwriter and actor. His powerhouse performances are amongst the most talked about in the country. With a voice that is simultaneously sweet and rough, Sultan knows how to turn on a crowd. Having released five studio albums to date, and received ARIA Awards for Best Male Artist, Best Rock Album, and Best Blues & Roots Album, it’s clear Sultan won’t rest on his achievements. He continues to search for the most authentic and thrilling way to capture the Australian spirit and further the path of Australian music.

Whilst 'Nali & Friends' is Dan’s first full-length kids album, he is no stranger to the genre - having previously collaborated with children’s music icons The Wiggles and Play School.


'Nali' is the cinematic lead track from Dan Sultan's first album for kids, 'Nali & Friends'. It's the heartwarming tale of an Artic tern (Nali), who loses her way flying from the North to the South Pole, meeting animals friends from all around the world along the way.