Dan Flynn and The State of Things - Heavy Lies the Crown 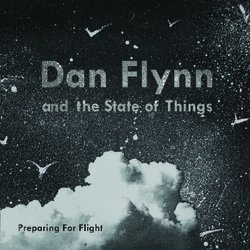 Melbourne's Dan Flynn and The State of Things (formerly Major Chord) release their brand new album 'Preparing for Flight'.
From 2007-2013 Dan Flynn released four albums under the Major Chord moniker. Three of these were solo offerings and then Dan met Aaron, Phil and Meabh and together they released the highly acclaimed final Major Chord album 'Transition' in 2013 (Feature album on Radio National, 3PBS, ABC Dig Music, Eastside FM).
Now we have 'Preparing for Flight'.
Some of the songs are finger-picked folk ditties, while others are full band songs. Some of them have pop leanings, others are drenched in psychedelic synth, but all of them are highly emotionally charged and fully realised.


Heavy Lies The Crown takes you on a journey and "all that you bring will only weigh you down". With heaving percussion, beautifully interwoven male and female vocals and a crashing piano crescendo, this song will take you to a place entirely unexpected.