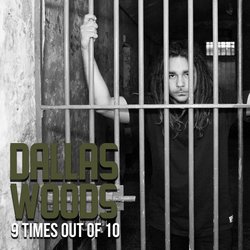 At a young age Dallas Woods developed the uncanny ability to find humour in unlikely places. Poverty, suicide, abuses of all kinds are common themes in his life. Its relentless exposure provides the mettle to cut-through his demons to apply words to the tsunami of feelings and thoughts. Dallas writes with a wealth of humility, knowledge and humour; it’s how he copes.

A Noongar man raised in the E.K. [East Kimberley] Dallas is a quintessential underdog who dropped out of school at age 14; he ran AMOK heading straight for the justice system. In 2007 the Indigenous Hip Hop Projects [IHHP] came through town and spotted this wayward kid’s cheeky knack for word play.

In 2009 he won E.K. Young Achiever Award at the age of 15. In 2016 he co-wrote the NIMA awarded track Break the Silence.
In 2014 Dallas met Baker Boy at an IHHP camp. Dallas took 17 y.o Danzal under his wing. It was here that Dallas inspired Baker Boy to start rapping in his own style. The two are staunch friends and continue to write together including Baker Boy’s current hit Mr La Di Da Di. 9 x out of 10 is Dallas’ debut.


Debut 9 x out of 10 raps about the power-trip police have in remote aboriginal communities and their overt presence being a normal occurrence to residents living there. Dallas Woods raps with clever humour about the stigma of being young, black and breaking the cycle of oppression from within community