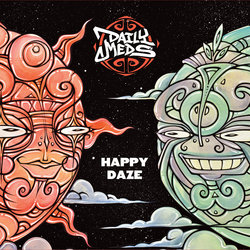 The crew formed in inner-west Sydney late 2009 as a collaboration between MC’s P.Smurf and Mikoen, producer Roleo and vocalist Billie Rose.
They began quickly generating a buzz with their high energy, engaging, raw performances leading to high profile support slots for Wu Tang Clan, DJ Premier, Rahzel, Urthboy, Horrorshow and many more. This along with sold-out headline shows of their own quickly earned Daily Meds a reputation as the hip-hop act to watch in Sydney.

The Happy Daze LP offers up a diverse take on modern hip hop and beats. The crew have focused on synthesizer-heavy production and relevant social issues - earning praise for their electronic influences and lyrical dexterity, resulting in a contemporary sound which references both the past and the future of hip hop in Australia.

Daily Meds have a stage presence and energy matched by few, and along with their Big Village label-mates will continue to earn recognition and respect as the future of Sydney hip hop.