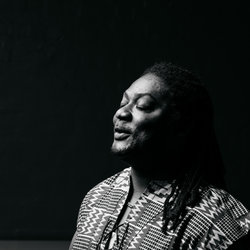 Dadanii Okwabi has been a musician since the age of eight. He is a professional drummer, singer ,dancer and teacher. He is well known in his native country of Ghana as well as in his new home Australia.

Dadanii began his career in 1978 after winning the best young singer in Ghana award at the 1978 Children’s Folk Music Awards. During his career Dadanii has worked with the Mantse Mei cultural group and high profile musicians including Okyrema Asante, Pat Thomas and the late John K. In 1979 he joined Ebaahi sounds as lead singer and recorded 5 albums. During this time he performed with Fleetwood Mac on their 1981 Ghanaian tour and recorded with Mick Fleetwood on the album The Visitor. In 1985 Dadanii worked with internationally acclaimed groups like Wulomei as lead vocalist. From 2000 to 2002 he worked in the UK with London based groups the Abladei and the Kakatstsi Band . Now Dadanii performs with his own band Damushi Ensemble.


Understanding the meaning of love, no lies just honesty and the love will be there forever.

Other tracks by Dadanii Okwabi and the Damushi Ensemble: Peace in the World  -  Yoko (Sweet Mother)