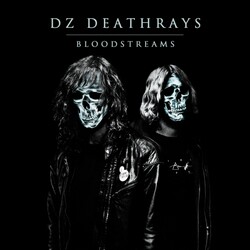 DZ Deathrays are made up of two main components. They were designed to play at house parties in the shady parts of Australia but of more recent times expanded their horizons and perhaps to stretch across the globe.

Since the first house party they ever played, the duo have been noted as a relentless live act making several trips overseas including SXSW and The Great Escape.

DZ Deathrays quickly fell into the good graces of highly respected publications NME Magazine and Q Magazine who both placed DZ Deathrays in top 10 bands of The Great Escape, while NME took their praise even further and placed them as the 4th most exciting new act of 2012!!

Upon returning to Australia in early November 2011, Shane and Simon finally ventured into the studio to record their highly anticipated debut LP, Bloodstreams, with Richard Pike (of PVT) and Neil Coombe at the White Room Studios in Mt Nebo. The duo spent the best part of two weeks tracking and mixing developing Bloodstreams into the 13 tracks that now show a great development in maturity from the previous release EPs.


2nd single from Bloodstreams, out now!

Other tracks by DZ Deathrays: No Sleep  -  Cops Capacity
%