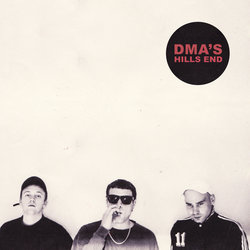 It's said that Australians are some of the most laid-back people around, always cool, calm and collected. For the most part, DMA'S fit that bill. The Sydney trio have gone from writing and recording in their bedrooms to living their dream of spending most of the last 12 months almost permanently on the other side of the world, playing packed out gigs to rabid fans, but their attitude is much the same as you imagine it would have been back when they formed in 2012 - taking whatever comes their way with a satisfied shrug.

Wasting time isn't what DMA'S are about. Their debut album might not even have been released yet, but they say they've already got enough songs written for a second album. They're a band that are constantly writing, constantly experimenting, splicing bits of old songs together to make something new like an audio Frankenstein's monster. That creative drive and curiosity combined with their unflappable outlook and sheer, undeniable talent has, in Hills End, already produced a body of work that's both intriguing and captivating. With gigs and festivals across the globe, from Australia's Laneway Festival to California's Coachella, DMA'S will be unstoppable in 2016.


'Toon Soon' carries all the charm and swagger of previously released singles. Similarly to the rest of their debut full length, ’Too Soon' was recorded between Took’s bedroom in Newtown and a small studio in Coogee, before being mixed by Spike Stent (Massive Attack, Madonna, Depeche Mode) in LA.