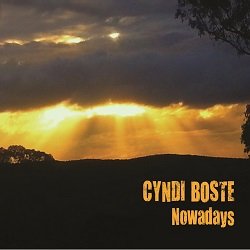 1999 her debut album 'Home Truths' ( produced by Kerryn Tolhurst) was an instant success with music critics and fans alike and secured her a place at the following years Port Fairy Folk Festival.
'Push Comes to Shove' was released two years later, with the beautifully haunting 'Holy Waters' eagerly picked up and recorded by Vika and Linda Bull on their album 'Love is Mighty Close'.

Next came 'Scrambled eggs'. A tribute to fellow independent Australian songwriters and recorded live in Cyndi’s kitchen, with a variety of guest artists including Mia Dyson, Vika and Linda Bull, Kerri Simpson, and many more...

After a self imposed seven year hiatus, Cyndi released her 5th album entitled 'Nowadays' in October 2103.

Cyndi's songs have been covered and performed by artists such as Kasey Chambers, Vika and Linda Bull, Kerri Simpson and is much loved and respected by her musical peers, music critics and fans.

Though Cyndi’s music can be passionately blue, it never whines. You’re more likely to be touched and healed than sent scuttling for Prozac. It's good for your soul.


This song was written as a tribute to the life of a DJ in Bellingen NSW, who became a great friend/mentor/supporter of mine after inviting me for an interview on his radio show. A fabulous guy that is sorely missed by many.

Other tracks by Cyndi Boste: Look out Ma  -  Lasted So Long
%