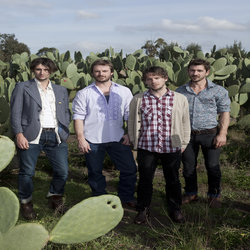 After numerous side projects, family obligations and working holidays, Melbourne’s much loved Custom Kings have released thier second album. Reuniting with long-time collaborator, Steven Schram (Little Birdy, Ground Components) , they booked two weeks at the famed Sing Sing Studios in Melbourne and brought to life a series of songs penned in the couple of years since the release of their acclaimed debut album At Sea. Once the shock of being in a real studio had worn off, they got to work and later emerged with a bag of wonderful sounding new songs and a keen aspiration take them on the road.


Lead single ‘Sunday’ showcases the above to brilliant effect – fuelled by a giddy rhythm section, rich layered harmonies and Nick Vorrath’s soothing vocals it is a sugar-rush that can’t be denied.


Other tracks by Custom Kings: We Go Wild