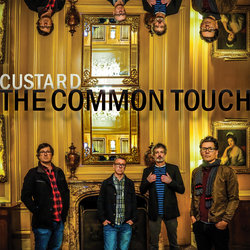 “Bands don’t come much more likable than Custard. They're funny, carefree, slightly weird but very endearing. And they write better pop songs than just about anyone.”
-The J Files, Double J

Having formed in Brisbane in 1990, Custard released five albums over the following decade (Buttercup/Bedford, Wahooti Fandango, Wisenheimer, We Have the Technology and Loverama).

The band developed a cult following, playing countless shows around the country and touring overseas, as well as producing a parade of memorable singles, several of which became entrenched in Australian pop music history. ‘Apartment’ polled higher than any other local artist in triple j’s Hottest 100 in 1995, with ‘Girls Like That (Don’t Go For Guys Like Us)’ coming in at #3 in the 1998 vote, before the group disbanded in 1999.

The band members all remained active throughout the 2000's, playing in groups including The Go-Betweens, The Titanics, The Polaroids, The Lost Gospel, The Purple Hearts and Beachfield.

In 2015, Custard returned with their first album in 16 years, the acclaimed 'Come Back, All Is Forgiven'.


“This recording of ‘2000 Woman’ is the only time we've played the song. We talked about the chords and the basic structure then we hit the record button. Lyrically it deals with the fact that girls are better than boys. It's taken me almost 50 years to work that out.”