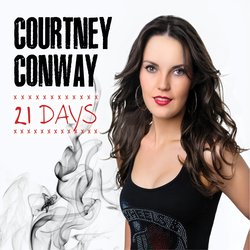 Since bursting her way onto the country music scene with her debut EP ‘A Few Little Things’ Courtney Conway has had both her singles reach the top 20 on the Country Music Channel, a top 30 single on the CMR chart, a nomination for CMC New Oz Artist of the year, won best new talent at the Victorian and National Awards in 2011 and supported some of Australia’s biggest stars such as The Sunny Cowgirls, Beccy Cole and Melinda Schnieder.

Courtney's debut album was produced by Sam Hawksley and recorded at ‘Fool On The Hill Studios’ in Nashville. “This album has been a long time coming and I cannot wait to release it for the world to hear! Recording in Nashville was absolutely incredible and something I’ve always wanted to do but wasn’t sure was possible. We had so many talented musicians playing on the record, including artists such as our very own Sam Hawksley, Australian Ben Bulter, whose been performing on the world's stage with his incredible guitar work, and Nick Buda who has played drums on all of Taylor Swift’s records.”


’21 Days’ is Courtney Conway’s first single from her debut album. It has that fresh country feel to it with a great Nashville vibe. The song describes the tortured path that love often takes, the angst of a new relationship and the commitment required.

Other tracks by Courtney Conway: Burning Your Memory Down
%