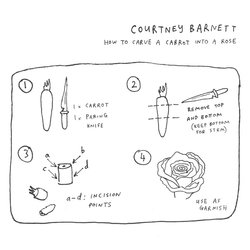 "Barnett's music builds on the wordy irreverence of mid-'60s Bob Dylan and a Byrds-ian blend of psychedelia, folk and country." - Pitchfork

"All tired trends produce their transcendent idols and Courtney Barnett is one of a kind. Paul Kelly’s successor?" - Collapseboard

"What sets her apart is she's got a sense of songwriting that hearkens back to the creative burst of the late '60s. Specifically in California -- her melodies and psychedelic harmonies remind me of the work of David Crosby or John Phillips." - Brooklyn Vegan

Courtney lives in Melbourne, plays guitar and writes songs. She likes to think her music defies genre but it’s really just an amalgamation of all the music she digs mashed into one.

Her new EP is called 'How To Carve A Carrot Into A Rose'.

Courtney has her own label. Called Milk! Records which has also released the music of Jen Cloher, Dyson Stringer Cloher, Royston Vasie and Fraser A Gorman.


Don't Apply Compression Gently is a straight up pop song in Courtney Barnett's laid-back garage style. The lyrics are entirely comprised of text messages that Courtney received from a partner after they broke up.

Other tracks by Courtney Barnett: Out Of The Woodwork  -  Anonymous Club
%