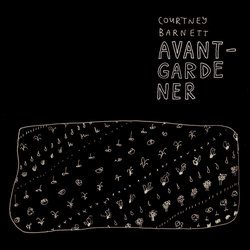 "The paramedic thinks I'm clever coz I play guitar, I think she's clever coz she stops people dying"

Late last year Courtney Barnett was rushed to hospital unable to breathe after gardening in the midst of a Melbourne heat-wave. She survived the incident due to some quick thinking paramedics and an epi-pen full of adrenaline.

After a few days in hospital the drama became a memory, she went back into the studio and added words to an extended jam that she'd recorded a couple of months earlier. That song is Avant Gardener.

Dan Luscombe (The Drones) again features on this track (as he did on Courtney's previous single History Eraser). His layered guitar squals are front and centre from the first note, piercing the laid-back grove of Courtney's band The Courtney Barnetts.

Courtney's explanation of the song is this:

"This was just a studio demo with no words, now it has so many words that it doesn't need a chorus. It's about the time I did some gardening and ended up in hospital. It's about the banality of life, pharmaceutical drug use, mindless procrastination and a broadening personal perspective. An altruistic tale of allergies and suburban asphyxiation."


This song tells the story of Courtney Barnett's brush with Anaphylactic shock while gardening on stuinking hot summer's day.

"Courtney Barnett is a genius poet. In case you didn’t know. This is her new track ’Avant Gardener’. It’s amazing" - Who The Hell