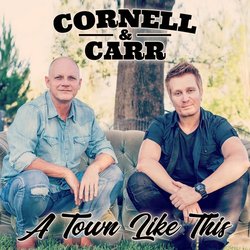 The release of this second single for CORNELL & CARR highlights not only the combined creativity of Matt & Mike, but also shows the evolution of them both, that has come about from literally doing thousands of shows between them.

Matt has worked as Adam Brand’s musical director for many years and has opened for international artists including Richard Marx. He was nominated for two Golden Guitar Awards in 2018, was a 2014 CMC Music Awards New Oz Artist of the Year finalist, and was a finalist again, this time for Male Artist Of The Year at the 2017 CMC Music Awards.

Mike has written some of the most popular country songs over the past two decades that include Adam Brand’s “The Anzac” and “Get Loud”, McAllister Kemp’s “It Don’t Buy You Love”, and Adam Harvey’s first single from the new album The Nashville Tapes,” I’d Rather be a Highwayman”. He is a two-time ARIA winner as well as a Golden Guitar winner.


“A Town Like This” tells the story of a young man who drives into an old, run down country town expecting nothing but to fill up the car, grab something to eat, and get back on the road as soon as possible. But then he finds true love, standing right there behind the counter.