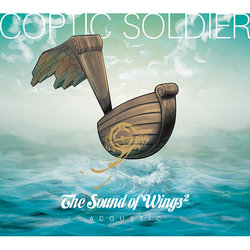 Coptic Soldier has gone from strength to strength over the past year, his debut EP ‘The Sound of Wings’ (a cross-genre collaborative effort with Sydney soul singer Miriam Waks) proved a huge hit on independent radio stations across the country, spending months in AMRAP’s Top 5 “Most Ordered To Air” charts. As well as joining Phatchance on two national headline tours and supporting many of the “whose who” of Australian Hip-Hop (Bliss N Eso, Drapht, The Herd, Pez, etc), Coptic has earned a reputation for bridging the genre gap through his close collaborations with multi-instrumentalist and producer Jon Reichardt. ‘The Sound of Wings 2 (Acoustic)’ is a beautifully textured release offering glimmers of roots and folk influences. Enormously varied instrumentation including everything from saxophone to hammond organ weaves a backdrop for Coptic’s pointed social commentaries (‘Liquid Company') and honest and self revealing lyricism (‘I Hate Sleep’, ‘Fight For The Fame’).

The first single from the release ‘I Hate Sleep’ features Brisbane indie-folk sweet hearts Charlie Mayfair, the group lend their evocative harmonies to the summery, dub style beat. A deep grooving bassline and syncopated guitar rhythm set the foundations for an endearingly clever and self critical offering.

Other tracks by Coptic Soldier: Liquid Company  -  Fight For The Fame
%