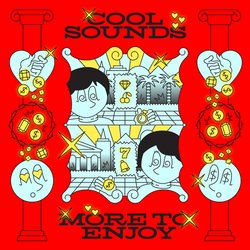 Cool Sounds are a Melbourne indie guitar-pop outfit. They’ve been playing together since the mid 10’s, fluid in line-up but with writer/vocalist Dainis Lacey at the heart of it, whose idiosyncratic falsetto makes the band instantly recognisable. Current line-up includes original members Nick Kearton, Steve Foulkes and Jack Nichols, and Ambrin Hasnain, who joined in 2018.

They are notable for their guitar-lick interplay, melodic lines and earnest delivery. The prolific group’s style is firmly rooted in Melbourne’s jangle scene, but they excel in borrowing atmospheres from past musical eras with enough ambiguity so as to create timeless songs.

Their third LP More To Enjoy is due for Sept 20th 2019, through Hotel Motel, Osborne Again & Meritorio (UK/EU).

Having launched first single “Around And Down” at a handful of Australian shows this past June, Cool Sounds will be touring Europe in July and August, before appearing at the Kyneton Music Festival and taking their new album around Australia late 2019.


The single is a taste of the the rhythmic, lofi 70s sound of the LP - drenched in woozy alt-country riffs and flamboyant instrumentation. This song features a watery Rhodes, phased congas, and some synthesized flutes and strings. Lacey says lyrically "it's about the complex nature of friendship and loyalty in difficult circumstances."