Connie Kis Andersen - Where My Heart Was Born 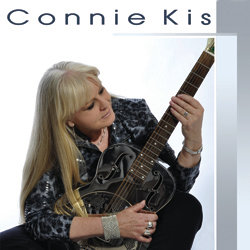 A true stylist, Connie Kis Andersen’s recent award as the 2011 Best Female Country Music Artist for W.A. alongside previous honours such as; 2010 Best Female Country Music Artist WA, The WWCMC 2010 Female Entertainer of the Year; Best Independent Country Music Album in 2008 and being named 2006 WA Best Female Country Music Vocalist has undoubtedly secured her reputation as one of the finest country music artists to emerge from Western Australia.
With four albums to her name, Connie Kis has opened for Don McLean, performed at numerous Australian Country Music Festivals, including Tamworth, Gympie, Mildura, Barham, Horsham and Boyup Brook.
She regularly tours the USA, has represented Australia at the Australian Festival in Nashville TN and Fort Lauderdale Fl. She has performed at The Bluebird Café, Nashville Palace, Tootsies, The Midnight Jamboree and on showcases at The Americana Music Festival and CMA’s Fan Fair.
Her self-penned songs have on the Australian Country Tracks Top 30, the most recent being a top 10 hit for the song ‘Steamy Dreams’.


A patriotic song embracing the wonders of Australia, tying east to west lyrically and acknowledging our history from Anzacs to the migrant influx, as well as the noting emblem that represents what it means to being a ‘True Blue’ Australian.

Other tracks by Connie Kis Andersen: Steamy Dreams  -  A Man in Boots
%