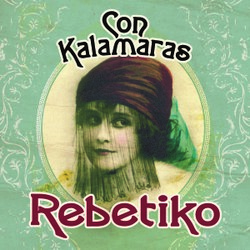 I originally started playing Rebetika at the age of 12 – i had started to learn Baglama- My initial exposure to this music was from the famous cult SBS TV series "To Minore tis Avgis",a TV series based loosely around the Rebetiko era in Piraeus in the 1930s. The show blew me away, the music was so raw and even at that age left a lasting impression on me. My father purchased a Baglama for me when in Greece and i started to try and learn the songs from the show by ear .

This introduction to this music was cut short when my twin brother smashed the Baglama over my knee..... and so i switched to guitar.

I spent my twenty's and early 30s playing in many contemporary bands, composing music and releasing independent CD's, which resulted in national tours and also performing and living in the UK.
After 15 years in Music I walked away- burnt, tired and in need of a break- but then like a lightning bolt out of a clear sky i stumbled across Rebetika , my reintroduction to it happened by chance one night in Richmond Melbourne at a very quiet little gig,