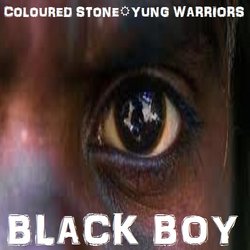 Nathan (payback) is a good young man and everyone should support him for what he is doing for indigenous artists within the music industry’ said master songwriter and leader of Coloured Stone Bunna Lawrie.

‘We are proud to release a new version of my first hit Black Boy with Tjimba of the Yung Warriors to help promote the tour too’.

In January Coloured Stone sold out the East Brunswick Club, rocked out at Federation Square for the Long Walk and played regional festivals delighting fans and festival producers. Coloured Stone also starred on TV at the ABC Marn Grook Show and before 83,000 at the AFL’s Dreamtime and the G game with Yung Warriors...

Will play NT Music Awards in Darwin the the national tour starts on 26th August in Brisbane and then Adelaide, Melbourne, Alice Springs and Sydney.


Hard to imagine they could record a version of 'Black Boy" with the energy, excitement and statement of the original, the most influential song in modern indigenous culture.