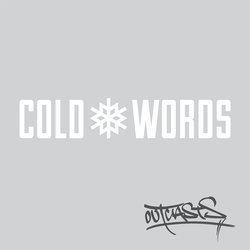 Cold Words was spawned by Regan Hughes who solidified himself in Melbourne's heavy music scene during his years performing in the now-disbanded hardcore band, Left For Wolves, who toured Australia, supported international acts and had charting releases.

In 2018, Cold Words released a 9-track album that delved into the complexities of depression, anxiety and confronting life-threatening illness.

Now, the single 'Outcasts' is getting an immersive music video, produced by Ben Wrigley from Third Eye Visuals (Parkway Drive, Thy Art is Murder, Boris The Blade).

Cold Words are announcing their eagerly-anticipated live performance. The band will be performing at Melbourne's Workers Club on the 22nd of November.


'Outcasts', is a slow-burning alt-rock track that pushes and pulls, from soft spacious moments to very controlled heavier sections. In an ordered fashion, the band move through calming verses with clean and overdriven guitar tones and restrained drum work.

With more momentum, dynamics build and in an anthemic style Hughes belts out chilling, raspy cries, harmonised by a wailing guitar.